Guess what?  I made another meal in the new recipe challenge.  Did I follow the recipe exactly?  Um, no.  About as much as I follow The Slow Roasted Italian’s Pico de Gallo, in fact.  This is another one of those “inspired by” recipe postings.  The recipe in question today comes from The Sisters Cafe, Aunt Ginny’s Chicken Salad.

The upshot is that I had purchased the pineapple, but I couldn’t bring myself to use it.  I just thought the salad would be too sweet at that point.  Then, I made more chicken than the recipe required, and I shredded it instead of dicing it.  Then I added more grapes to compensate for the lack of pineapple.  And added a few extra slices of almond.  And not as much celery because I was tired of chopping (plus, we’ve been cleaning all day).

The verdict is that everyone liked it.  It had several of Muffin’s favorite things in it:  almonds, celery, chicken, and grapes. 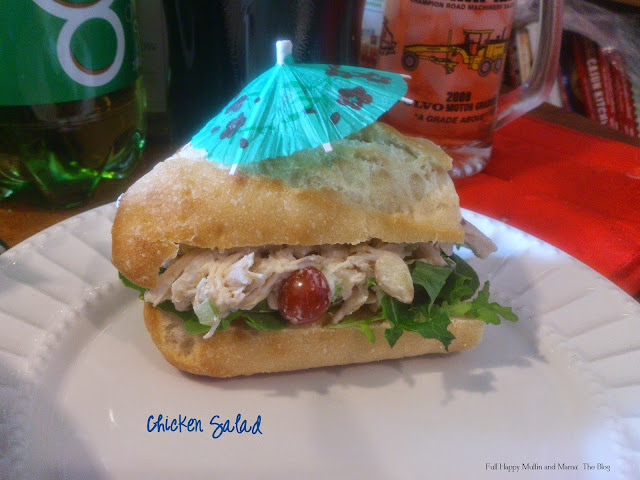 Combine the first four ingredients in a large mixing bowl.  In a separate bowl, whisk together remaining ingredients.  Pour them over the salad ingredients and toss to coat.  Refrigerate until serving.  We served them on mini baguettes that were in the reduced bakery section of Albertson’s, and I felt very garden-club-y.  I think it would also be fabulous on a bed of lettuce.  I used the umbrella picks to hold the sandwich together and keep Muffin entertained.  I found them at a kitchen supply store in Baton Rouge (in the area devoted to bar supplies).

Another Saturday, another grocery store round-up.  There were some okay deals this week.  Albertson’s is having their Crazy 8’s sale which is always fun.  This is what I found:

I Can’t Believe It’s Not Butter Spread $1.99 (and receive a free dozen of large eggs)

What are your great shopping deals this week?

I have been busy making more printables.  I now have a third one ready to reveal and download in PDF format for people who love Louisiana as much as I do.  It is another piece of subway art, a way I can indulge maniacally in my love of all things font and color palettes.  I’ve become a bit obsessed with colors and their RGB (Red-Green-Blue) codes.  I literally went to Target yesterday and could not stop wondering as I passed each bit of colorful merchandise exactly what were the color codes for those colors.  I couldn’t shut it off. I’m probably going to take a break from all things printable for a few days, although I do have one or two percolating in my mind.  I hope y’all enjoy.  Please feel free to click the image below to head to the Google Docs downloadable PDF file.  (P.S. Even if you are unfamiliar with Louisiana, check it out.  It will make you love my home state.) 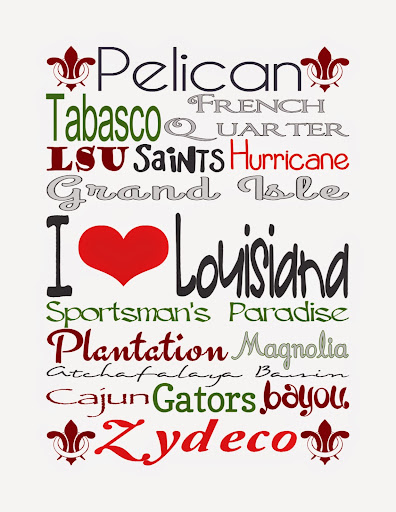 Let me just begin by saying that I altered the recipe slightly.  I committed the one recipe no-no.  I didn’t have all of the ingredients on hand because, when I wrote my shopping list, I thought SURELY we have tomato sauce.  Um.  No.  And I didn’t feel like sauteeing garlic and onion in olive oil.  There.  I said it.  I felt lazy, cooking-wise, yesterday.  And since I was working on the summer printable most of the morning, that kind of put me in a time crunch for starting the Crock Pot.

So, even though I tried (and tried hard) to follow the recipe exactly…I just didn’t.  I should note that I used my smaller Crock Pot, known affectionately as “Red,” to make the casserole.  I really stretched the limit of its capacity (i.e., there was sauce leaking out from under the lid until the ravioli thawed and things started to settle a bit). 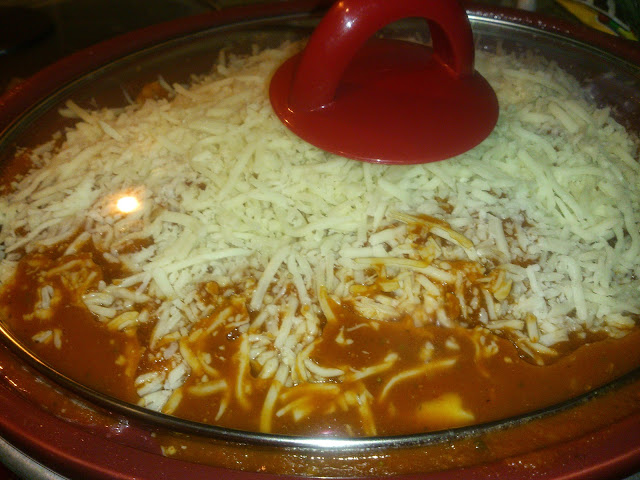 But…it was yummy and easy to prepare (especially if you use a big Crock).   Especially if you prepare it the way I did.  But I am including the link to the original (from Six Sisters’ Stuff) for those who wish to use fresh onion and garlic in the recipe.  One of the commenters on the original recipe mentions adding spinach to it.  That would make a good addition.  Or other vegetation.  Or using other types of ravioli, I think.  Or adding some fresh parmesan in it. This recipe was yummers, and almost like a more sophisticated Chef Boyardee ravioli (which, I admit, is still a guilty pleasure).  The sauce is not as bland as Chef Boyardee.  Also, the ravioli is often on sale or cheap at Target.  I think this recipe could be easily halved as it makes A LOT (as evidenced by the overfilled Crock Pot).  Everyone liked it, including Muffin and Josh (and Daisy).

But here is what I did. 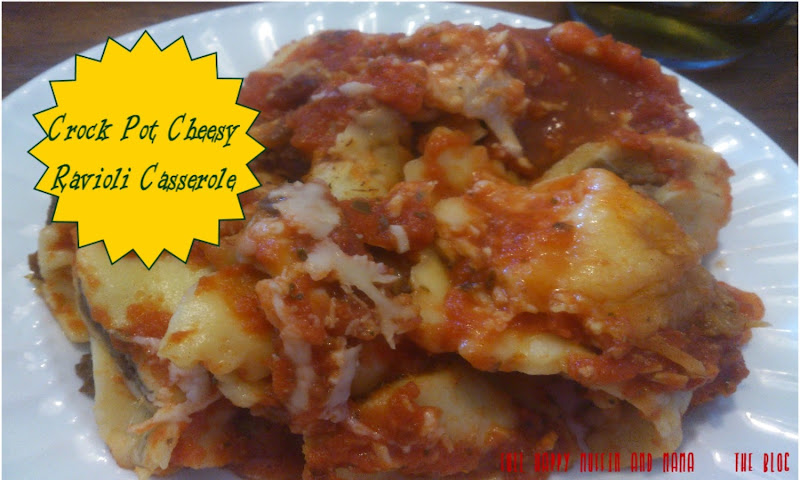 Slowly dilute one can of tomato paste with water in a large mixing bowl (whisking steadily or beating with a fork to combine).  Add the cans of pasta sauce and the seasonings and mix well with a whisk, fork, or spoon.

Spray your Crock Pot (I would recommend using a 6-quart crock or larger) with non-stick cooking spray.  Spread one cup of sauce in the bottom of the cooker.  Dump in one package of ravioli.  Cover with 1 cup of cheese.  Drizzle about a cup of sauce over the cheese.  Dump other package of ravioli on top of that.  Cover first with remaining sauce and then with the remaining cheese.

Cover and cook on low 5-6 hours.  (I would recommend turning it off half an hour before serving time so the casserole has a chance to “set up” and become “cuttable,” rather than “scoopable.”  I didn’t do this and regretted it.  It was still yummy but I think it would have been taken to a whole ‘nother level had I let it rest.

I should note that we are again trying to get rid of leftovers, so tonight’s dinner selection will be delayed.  We are taking leftovers over to my mom’s for supper (the ziti, the ravioli, and the leftover “Chipotle” goodies).

It’s time for another Funny Muffin Friday post.  Since Muffin and I have been home together this week (boy, has the time flown), I thought I should share a Muffin moment from Wednesday. 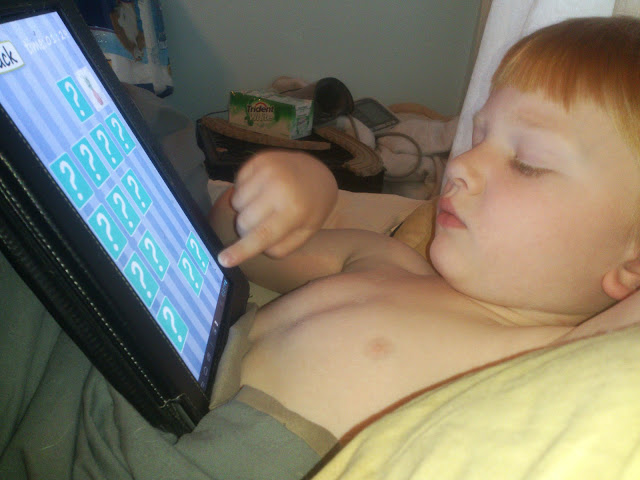 Yes, I did it.  I made another printable.  It went much faster this time, and I was less frustrated.  I decided to do a printable in homage to my love of my state (and, in particular, its food).  So, without further ado, drum roll please: 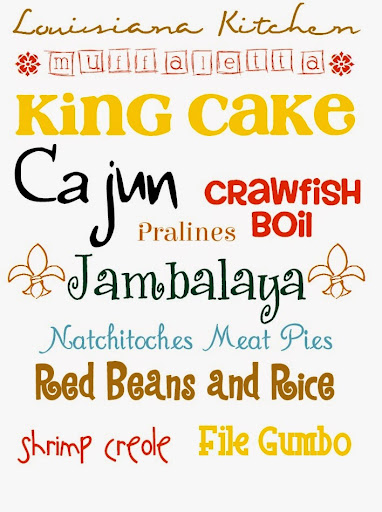 Click on the lovely printable above to see it, print it, and download it in Google Docs.  Many of the fonts on the printable were made possible by Kevin and Amanda (below). 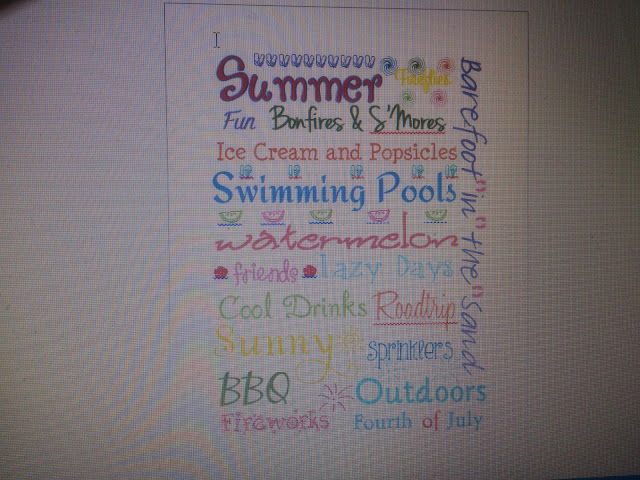 It looks better than this printed, but I had to have an image to go on Pinterest.

Good morning, all!  I have just made (literally, if it were printed in a newsroom, it would literally hot off of the presses) my first free printable to share with all those people who, like me, adore printables. This file is full-color, in PDF format, and found on my Google Docs.  Be sure to click the “printable” button below if you want to download it.  I hope to work on more printables as the summer progresses (including Christmas gift tags–my absolute fave!).  Let me know what you think by dropping me a line below.  I hope you enjoy. By the way, I could not have made this subway art without the wonderful fonts by Kevin and Amanda.  Their fonts are awesome, and you can even have your handwriting converted to a font by them (something that I hope to do this summer).

I hope you enjoy!