So, this is the second week of the Aldi Test of the meal plan.  So far, things are going well.  I managed to only buy five things from Kroger last week:  canned/bottled drinks, lasagna noodles, pork chops, and some of Rene’s lunch stuff.  I was very proud of myself.

This week, the meal plan uses much of what we had already in the house…and it’s the week of Thanksgiving, which automatically blocks out a lot of stuff.

So, what do we have to look forward to?

Okay, now that you are scratching your head confused wondering “What the heck is the Aldi test?” I will feel free to enlighten you.

For the past few months, on alternating Saturdays, I have trekked (sometimes with Josh…only twice with Muffin and almost not survived the experience) an hour away to Longview to our nearest Aldi.  I had been a few times before in Houston and Dallas, and, of course, had been enchanted with the stories of individuals in the Pinteresting Blogosphere who have saved a ton of money at Aldi in the past.

However, I will wax poetic about Aldi in tomorrow’s Tip Tuesday post.

But, now, for details about the Aldi test.  Since I go to Aldi every other week, I’m going to try, for the next two weeks (this week and next week) to plan out my meals and shopping for the next two weeks and plan meals around what is in the house and what I can mostly buy at Aldi.  Now, there are a few outlying supplies that I will buy at Kroger, but my goal is to not shop at all at a grocery store in the intervening week.

How is that possible?

I plan to buy bread and long storage veggies that will last into the second week.  Salads and perishable stuff will be used in the first week, but frozen veg will be used the second half of the shopping cycle along with canned veg.

We will see how this works.  Fingers crossed!

I know there are people who shop every month and every two weeks, but this is new for me.  It will require strict adherence to the meal plan and a ton of foresight.  Of course, the following week is Thanksgiving (American), and that only requires the foresight to know what I’m bringing to my mom’s.

Monday:  breakfast for dinner (Josh is home, so he gets to cook!)

Wednesday:  anniversary dinner out (Happy 9th anniversary to the most wonderful man in the world!)

Sometimes (as is the case of the Mississippi Roast I made yesterday) I misread or forget an ingredient (at 5:30 in the morning when you are racing around trying to gather lunches and stock the slow cooker and get ready for work it happens).  Sometimes, I substitute ingredients.

And, sometimes, after a long, hard day at work, I get…lazy.  There!  I said it.  The recipe I am going to share with you today (my adaptation of Wholly Guacamole Enchiladas by Mommy Hates Cooking) is the product of my extreme laziness.  Rather than enchiladas, it became more of an enchilada casserole.

It was still yummy, but I don’t have the patience to warm corn tortillas to make them pliable, then fill and roll them, cursing them when they still tear and crack anyway on the best of days.  After a day of teaching?  It’s not happening.

So, I put a bit of the sauce in the bottom of a 9×13, spread six corn tortillas flat, then put the enchilada filling on top, then six more tortillas followed by sauce and cheese.  It turns more into an echisagna at the end, but it is still delicious.

Note:  the one thing I will INSIST upon is that you use an enchilada sauce that you like.  I used one from my Aldi run and it was too spicy for anyone except me.  They still tasted awesome, but Muffin and Josh couldn’t finish theirs.  And the sauce was really watery.

But here’s what I did.

1 can Rotel (the original says drained…I just realized that)

1/4 cup cilantro leaves, roughly chopped (I could still tell there were leaves in mine.)

16 ounces guacamole (I had two 8 ounce packages in what I purchased from Aldi, so I used it all.)

2 cups shredded cheese (I used a mix of sharp and mild cheddars.  Monterey Jack would be awesome as well.)

Lightly coat the bottom of a 9×13 Pyrex baking dish with enchilada sauce.  Place six tortillas on the bottom of the pan, overlapping slightly as needed.  Pour and spread all of the guacamole mixture over the tortillas, smoothing as needed.

Cover with six more corn tortillas, arranged as before, pressing slightly to adhere and smoosh.  (Yes, smoosh is a technical term.)  Cover with remaining sauce (I love saucy enchis!) and cheese.

Bake until hot and bubbly (about 30 minutes) and cheese is melted.  Let sit 10 minutes then cut and serve like lasagna. 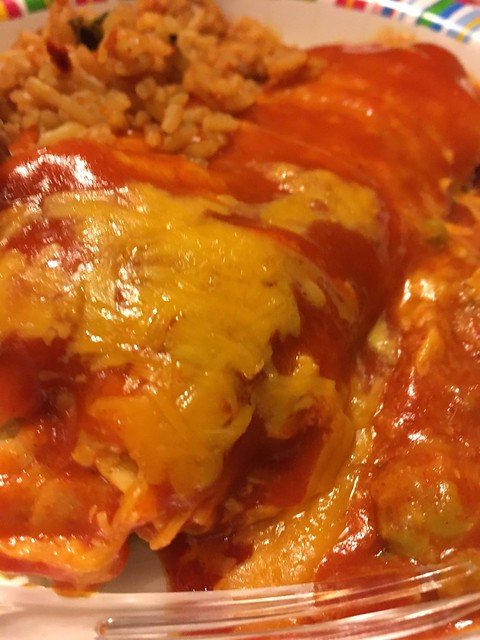 What is your favorite lazy shortcut?

Well, last week was sorta successful, meal-plan-wise.  I did make the Wholly Guacamole Enchiladas, but I turned them into an enchilada casserole.  I’ve discovered i have no patience for corn-tortilla-enchilada making.  The softening of them to make them pliable is not my cuppa tea.

This week shall be easier to follow the plan.  Tuesday the fate of the nation will be decided, and I will have an extra day to cook.

So, here’s what I’m thinking:

What is on your meal plan for the week?