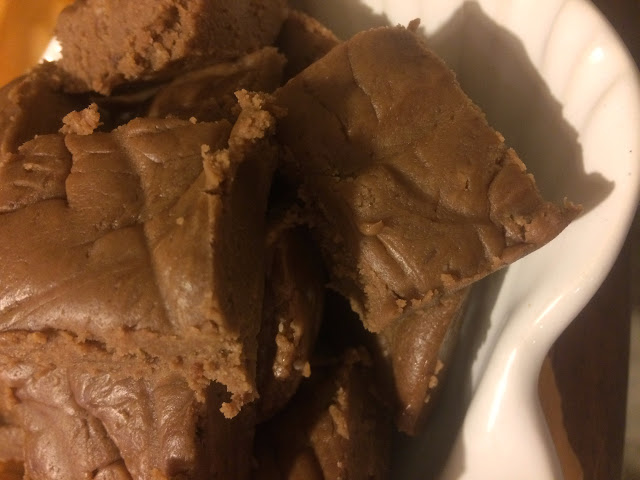 Today’s “goodie” comes from one of the most hospitable people I’ve ever met.

Back in the early-to-mid 90s, my sister was dating, then engaged, then married to the man who became my brother-in-law.

In the evening of every holiday, we would go to his parents’ house.  Regardless of outside temperature, there was a bonfire outside and a myriad of my brother-in-law’s family.

Inside, the food varied by season.  Summer saw not-quite-mature green tomatoes, breaded and fried to golden perfection, tart and crispy and dunked in ketchup by an awkward and awestruck teen, who had newly discovered that Southern delicacy at my sister’s future mother-in-law’s side.

In wintertime, Christmas meant Velveeta Cheese Fudge, mild in flavor and melty in mouth feel.  During the following years, I must have consumed pounds of both–all prepared by my brother-in-law’s mother’s hands.

Each holiday, she opened the doors to her family–her sisters and their descendants and various spouses–and my family, from the time my sister and now-brother-in-law began dating.

She passed away in 2002, but memories of those gatherings, of her hospitality and her food, live on, for me, in my mind.

Spray lightly the bottom of a 9×9-inch square pan with nonstick spray.

In a saucepan over medium heat, melt the cheese and butter together, stirring constantly until smooth.  Remove from heat and add the vanilla.

In a large bowl, sift together sugar and cocoa.  Pour the cheese mixture into the sugar and cocoa mix and stir until completely mixed.  The candy will be very stiff.

Using your hands, remove candy from bowl an press evenly and firmly into pan.  Blot the top of the candy with a paper towel to remove the excess oil. Place pan in fridge until firm.

Cut into squares to serve.

These, by the way, are completely Muffin Approved!

One thought on “The 25 Days of Holiday Goodies Day 7: Velveeta Cheese Fudge”