Recently, we made a recipe a reader sent me from the newspaper in Naples, Florida.  The truly odd thing was, shortly after I received the recipe, someone offered me a whole bunch of eggplant, and I was going to make it then, but things happened.

Namely the eggplant went bad before I could arrive to receive it.

But Kroger has been having a New Lower Price! for eggplant (which I NEVER purchase by the way) of 99 cents each.

So, one day, I just had to buy the eggplant to make this.  Well, it involved the grill, and only Josh knows how to operate the grill in our house, so I did all of the prep work, and Josh cooked it.

We ended up serving it as a side, but this could so be a main dish for a meatless meal.  We served it with buttery garlic mushrooms and pork chops.

It tasted awesome, but there are a few changes I would make.

So, here is the plate o’goodness: 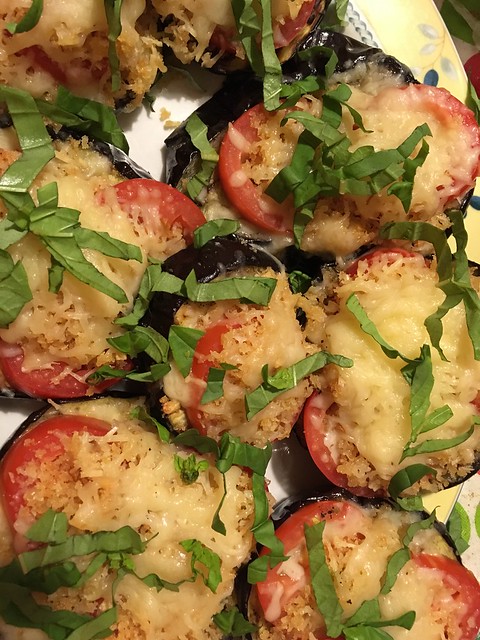 Yes, it truly is as awesomely beautiful and vibrantly colored as was in the picture.

2 T extra-virgin olive oil, plus extra for brushing on the eggplant

1/2 cup panko breadcrumbs (Panko is like sweetened condensed milk.  All recipes with it are automatically awesome!)

(Note:  Just noticed that the recipe calls for you to peel the eggplant.  Oops!  I still think grilling it first and then peeling it would work best)

Prepare the grill with a hot and indirect cooking side.

In a medium skillet (inside the house) over medium low, combine the measured 2 T oil and garlic.  Cook, stirring, until your mouth waters from the smell.  Add the panko.  Increase the heat to medium and cook until the crumbs turn golden and crunchy, 2 to 3 minutes, stirring constantly.  Transfer to a bowl, stir in the Parmesan cheese, and set aside.  Repeat so that you have plenty to taste test and some extra for the topping.

Pat the eggplant slices dry and brush one side of each with olive oil.  Add to the grill and cook over the hotter side until the slices are nicely browned on the bottoms, 5 to 6 minutes.  Brush the top sides with more oil, turn the slices over grill until browned on the second side, about another 5 minutes.  While the eggplant is grilling, pat dry the tomato slices.

Transfer the eggplant slices to the indirect heat on the grill, then top each slide with enough tomato slices to just cover the top.  Top the tomatoes with 2 tablespoons (or more if you made more) of the panko mixture, then divide the mozzarella cheese evenly among the slices.  Cover the grill and cook 4-6 minutes until the mozzarella is melted.  Transfer 2 slices to each of the four plates and top each portion with some basil. 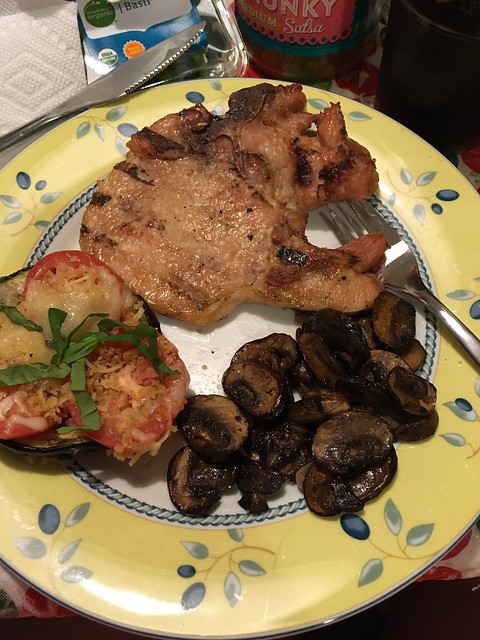 What is your favorite grilled veg recipe?