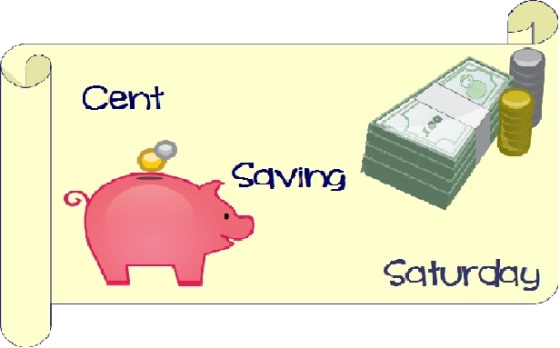 Yes, I know it has been forever since the last CSS post.  It’s not that I’ve forgotten CSS posts.  It’s just that, for the most part, sales in our area have been kind of “meh.”  Okay, but nothing to write home (or a blog entry) about.  And, I was stumped on what to write as the main part of the blog entry.

And then…I tried a recipe that a reader had recommended.  It was as if the heavens opened, the birds tweeted softly, and cotton candy started dancing.  Not really.  But close.  Yes, it was that awesome.

It was a recipe from Serious Eats, “Baked Ziti with Two Mozzarellas and Parmesan Cream Sauce.”  We ate it last Sunday.  It was Muffin Approved.  It was Josh Approved.  It was Me Approved.  Daisy really wanted to make it Daisy Approved.  I love it because even though Serious Eats says that it makes six servings, we are still eating on it.  I’ve eaten it for dinner a few times (because the meal plan went to “hockey sticks”) as well as lunch and even (for those of you who don’t know of my secret vice of eating leftovers from the day before for breakfast) breakfast for several days.

It makes A TON!  It’s awesome!  Which brings me to my focus for this piece.

You can save money through meatless meals.  The baked ziti does use some pretty pricey ingredients, but I managed to find them mostly on sale.  And, did I mention the recipe makes a ton?  After we pigged out on it Sunday, there were still two plasticware containers FULL and a plate for me for lunch the following day.  The cost-per-serving is tiny.  And, it freezes well in individual servings and reheats well.

What about other dishes?  We’ve all heard the anti-frugalista’s lament:  eating frugally only allows you to eat rice and beans.  Rice and beans make a complete protein, first of all.  And, moreover, if you use a very tasty bean recipe, beans and rice can be pretty awesome.  And, they can be used for burritos (with the beans left whole or smashed to become “refried”) as a reinvented leftover.

Scary thought:  I just realized that I have very few meatless meals listed on the blog, other than the Crockpot Baked Ziti and Crock Pot Macaroni and Cheese.  So, to my readers, I issue you this challenge:  what are your favorite meatless meals?

Now, on to the show (with the recipe and the week’s deals). 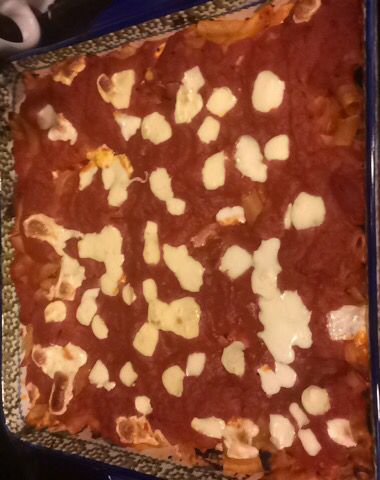 2 cups diced fresh mozzarella, divided (I bought one of the eight-ounce balls, and it was sufficient)

2 ounces Parmiggiano-Reggiano cheese, about 2 ounces, grated to a “snow drift” with a microplane

Preheat oven to 400 degrees.  Rack should be in the center.  Boil pasta in salted water (think seawater is what I was always told) for 6 1/2 minutes.  The pasta will not be al dente!  It will finish cooking in the oven!  Reserve 1/2 cup of the starchy pasta water.  Drain pasta.

Scrape into a large flat baking dish, either rectangular or squarish.  Press down into an even layer. Drizzle remaining sauce over the pasta.  (I used another jar, so another three cups, but I love things saucy).  Scatter remaining fresh mozzarella artistically over the top.  COVER WITH ALUMINUM FOIL!  (Guess which step I forgot the first time for about five minutes until I read through the next instruction that says to uncover the ziti?)  Bake 30 minutes.

Meanwhile, in a medium saucepan, gently simmer cream over medium-low heat, stirring frequently, until reduced to 1 1/2 cups, about 20 minutes. Sprinkle in Parmigiano-Reggiano into cream and whisk until completely melted and sauce is smooth. Season with salt. Keep warm.  Taste repeatedly then castigate yourself that there may not be enough sauce left for the ziti.  Then, cover up your guilt by tasting again.

Increase oven to 450°F, uncover baked ziti, and cook until just starting to brown on top, about 10 minutes. Let stand for the longest 10 minutes of your life–not kidding here. Top with basil leaves, spoon onto plates, and drizzle with Parmesan cream. Serve immediately. 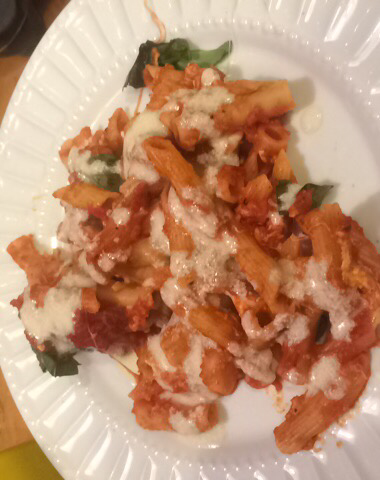 Guess what I’m having for breakfast?

What are the deals in your area this week?