I’m trying to be more open about the bad.  I think I do okay opening up about the good, but this challenge has been…a challenge.  Monday I tried a new version of the Pizza Grilled Cheese Sandwich that I first saw on Forkful of Comfort.  I figured that a Hawaiian version would be great.  I love Hawaiian pizza (I especially love simply pineapple pizza), and it is a family favorite.  After the success of the salami version, I figured it would be AWESOME!  And it was.  Like totes.  🙂  Here’s the kicker:  it is the fastest recipe ever.  It takes as long as it takes to make grilled cheese.  And not being a fan of cheese singles, being able to use mozza really amps it up.  And…all I have to say is…pizza dipping sauce.  I swapped out the butter/margarine on the outside with mayo.  Mayo is easier to spread more evenly (none of the torn bread syndrome).

Think of this cheesy goodness. 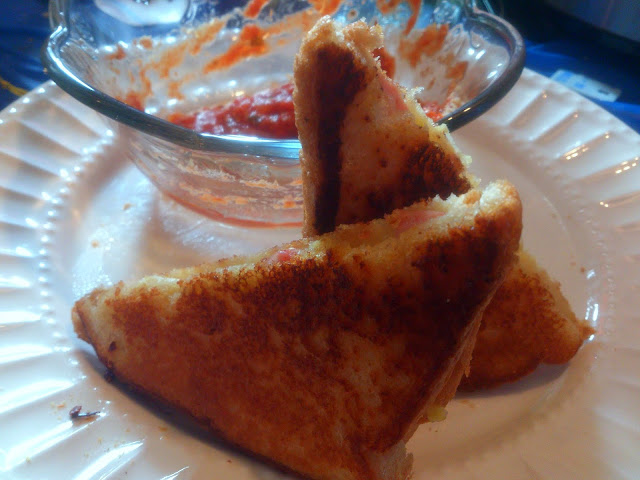 butter, margarine, or mayo to slather on the bread (one side of each slice of bread)

shredded mozzarella (enough to layer on the bread twice

half a small can of crushed pineapple (and to keep the sandwiches flat enough it needs to be crushed), very well drained

Heat a nonstick skillet over medium heat until hot (You may want to spray the surface with nonstick cooking spray).  Place the sandwiches on the pan (being sure not to crowd too much).  Once the underside is browned and the cheese is partially melted, flip each sandwich carefully.  Cook until browned on that side and cheese is completely melted.  Cut diagonally into either two or four triangles (Muffin’s preference).  Repeat for remaining sandwiches.

This was the thumbs-up portion of the week and definitely Muffin Approved.

That was the good news.

The thumbs down was my fault.

I attempted to make Josh’s Oma’s meatloaf in the slow cooker.  I had similar results to the Chicken Parmigiana meatloaf.  If you overcook meatloaf it turns kinda sour tasting.  If I had stopped at the five hours on LOW that I had it set for, but I didn’t think it looked quite done, so I set it for another hour.  It resembled dark brown leather afterwards.  I managed to choke down a slice, but Josh and Muffin couldn’t.  I do have to say this:  Oma’s meatloaf is yummy enough to deal with heating up the kitchen for.  Although the culinary adventuress within me wants to try it one more time and stop it at five hours.  I think it would have been awesome.

I didn’t take a picture.

Tomorrow we consume pancakes and bacon.  I plan to use the recipe from Miss Kay’s cookbook (because I like it the best) but to make sure I don’t use expired baking powder.

What is your biggest culinary achievement or disappointment lately?