As today is the first day of summer (and we are traveling to Canada), I decided to front-load some posts during the duration of the trip.  Think of it as the cooking once, eating twice method of posts.  Some days I have tried out more than one recipe, and, rather than put my readers into post overload, I decided to save some of the posts for the road.

Don’t worry; I will still be checking in at night when we stop for the night and at my mother-in-law’s.

The first day of summer deserves a truly heat-free-kitchen recipe.  And a cooling recipe, at that.

For months, I have gathered spa water (or sassy water or flavored water–whatever you call it) recipes in hopes of obtaining one close to my first taste of spa water.  At one of Josh’s cousin’s weddings, the beverage of choice at the reception was a lemon-cucumber spa water that basically softened the taste of the water.  We have lots of mint growing in the yard, so I was hoping to find a lemon-cucumber-mint spa water recipe.  Well, I didn’t find one that quite touched it, so I decided to experiment to make my own.

And the results were yummers!  Very refreshing, especially for a confirmed pop drinker (or coke or soda, whatever you call it).  It tastes very cleansing, much like a day at the spa! 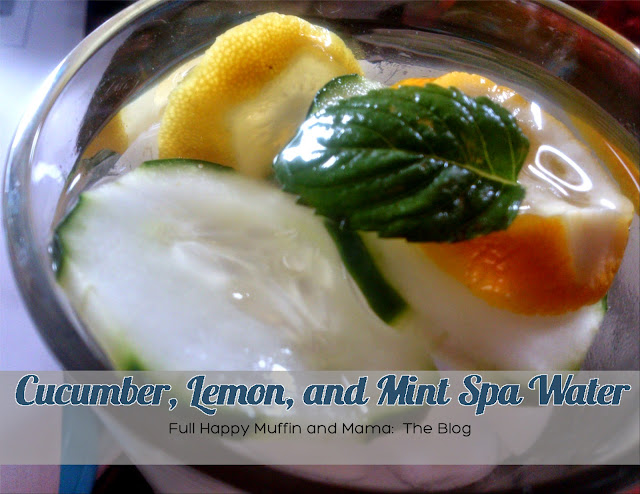 1/3 cucumber, peeled in staggered rows so that strips of green peel appear on each ring, sliced thinly 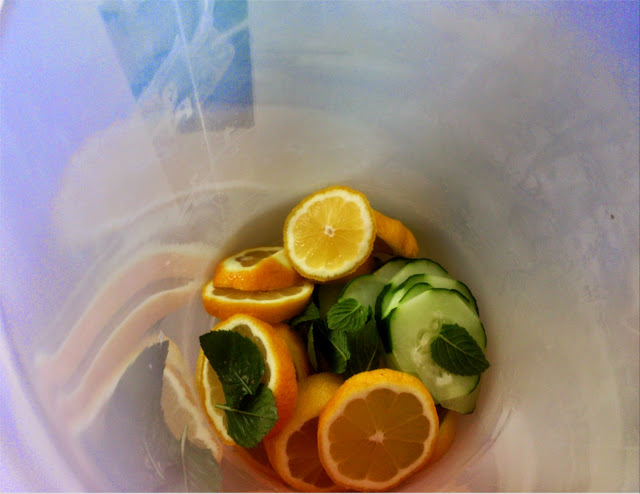 Muddle slightly with the back of a spoon (but not so much that the pieces are mangled).  Fill pitcher to top with filtered water.  Refrigerate at least two hours, but no more than 24 hours (because the pith from the lemons will make the water bitter).

Enjoy over ice with a mud mask or facial (if you’re lucky enough).

Muffin didn’t try this, so I do not know if it is Muffin Approved, but it is Josh and Muffin’s Mama Approved.

What is your favorite spa water combo?